The theme and mystery of the Giants is not a current topic; This has been in the tabloids for many decades and the evidence is uncountable. Ancient manuscripts describe the existence of many races of colossi in the remote past, but despite this, all suffered an inexplicable extermination and disappearance. What happened? What caused these powerful beings to simply die off the face of the Earth?

In this article, the author Adam Oliver Stokes, provides a more detailed look at various stories extracted from ancient texts and that allow us to piece together the almost null history of these lost species of humanoids.

The giants were here

The giants were here. By using the term giants , I mean people who are at least 2.1 to 4 meters tall. Given that pre-modern man was significantly shorter on average than we are today, these giants would certainly have been of extraordinary stature.

That an ancient race or races of giants once existed throughout the world, from China to North America, is a matter attested not only in the written records of various civilizations but also in the archaeological record. As Jason Jarrell and Sarah Farmer point out, the sheer number of gigantic humanoid skeletal remains excavated from the North American region alone makes it statistically highly unlikely that we will interpret them all as genetic abnormalities, as mainstream scholars often do.

The giants were here . However, this observation immediately leads us to another troubling question: If giants, as a race or races, once existed in ancient times, why don’t they exist now? What happened to them? What factors led to its extinction?

The archaeological record largely, though not entirely, does not answer these questions. This is particularly evident in work done on giant civilizations in North America. North American archaeologists and anthropologists have done an incredible job of addressing the unique cultural characteristics of Hopewell and Adena, pre-Columbian peoples who were either giants or direct descendants of an earlier race of giants. At the same time, North American archeology struggles to explain the sudden disappearance of both civilizations sometime around AD 500. C.

In this article, I will propose an alternative anthropological method to determine the fate of the ancient giants. Rather than attempting to interpret the scarce and inconclusive archaeological evidence, I suggest that scholars turn to ancient texts and the mythological / religious traditions they contain. As Erich Von Daniken points out , ancient literature, while highly mythological, often has the facts at its core. 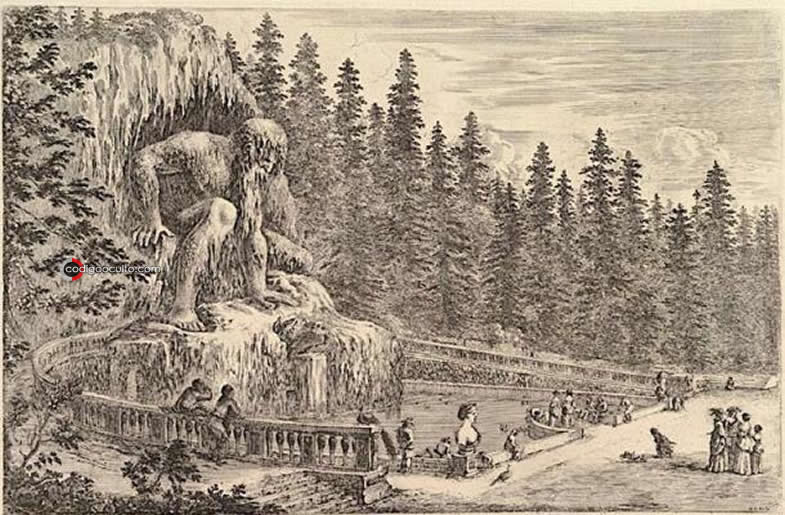 Furthermore, as Von Daniken also points out, many of the narratives contained in ancient manuscripts are much more literal than modern scholars of the 21st century give them credit for. When this material is taken into consideration, it suggests that many of the ancient giant civilizations were violent and oppressive in their culture and were eventually destroyed by their own violent tendencies and actions.

The description of giants in ancient literature

As Xaviant Haze points out in his recent work Ancient Giants , tales and tales of giants are a universal phenomenon found in almost every human culture throughout recorded human history.

When these various accounts are examined, a common theme emerges, namely that the giants and the civilizations they created were defined by violence and bloodshed . While a thorough examination of the giants in ancient oral and written traditions is beyond the scope of this article, it is possible to limit our focus here to treating the giants within a particular culture and its body of literature.

As someone with a background in biblical studies, the ancient Israelites immediately came to mind as the best candidates for such an exam. Unlike many other ancient Near Eastern societies, the history of ancient Israel is very well documented in both biblical (i.e., the Old Testament / Hebrew Bible) and extra-biblical sources. 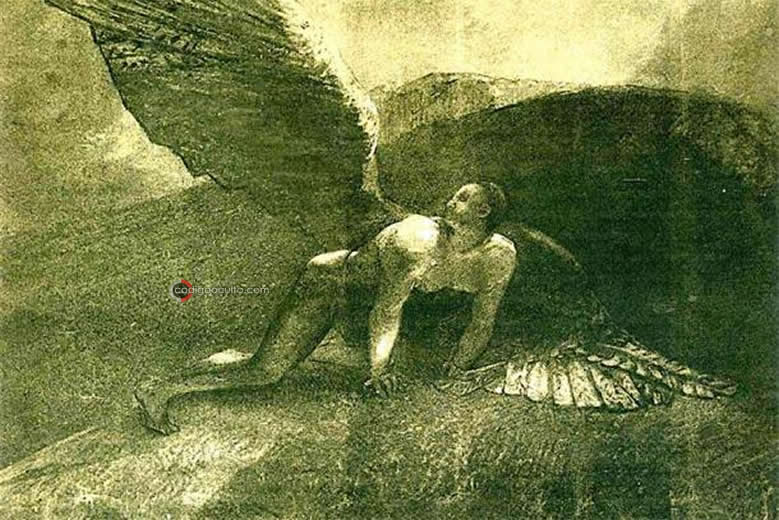 One of the first references to the giants in Israel comes from the Yahwist account of the Great Flood found in Genesis chapter 6. (The Yahwist is one of the four authors or sources of the material in the first five books of the Old Testament commonly referred to as the Torah or The Pentateuch. The theory of the four sources was popularized at the end of the 19th century in the work of the famous German biblical scholar Julius Wellhausen. the “daughters of men” (banot ‘anashim) as wives.

The Latin translation of the Genesis 6 passage reads:

But the giants were on Earth in those days. The sons of God were with the daughters of men and these (women) gave birth. From this union arose the powerful of long ago, the famous men. (Genesis 6: 4) 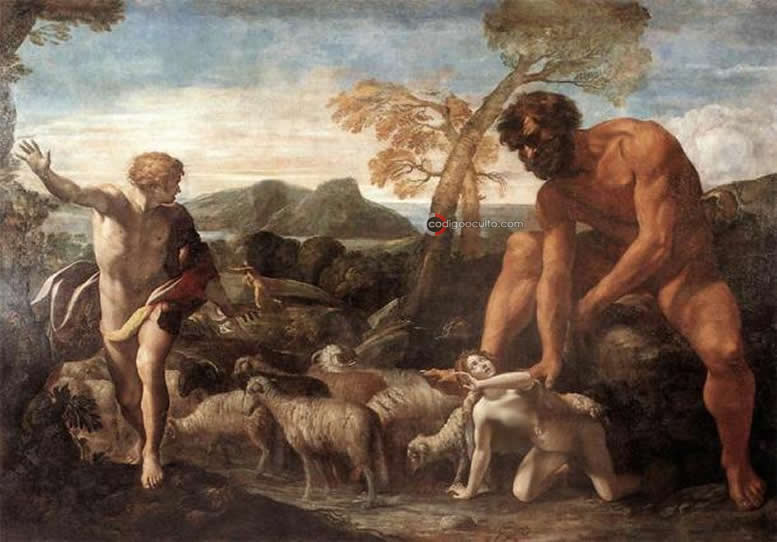 Although the account of the flood suggests that the giants were wiped out with the rest of the Earth’s inhabitants, without Noah and his family, they appear again much later in the biblical timeline in what scholars call the Deuteronomic story. (In Bible studies, the Deuteronomy story refers to material from Joshua to 2 Kings in the Old Testament. The story begins with Israel’s entry into the Promised Land and ends with the destruction of the Southern Kingdom, Judah, in 586. BC)

Within this story it is undoubtedly the most famous account of a giant in biblical literature and possibly in Western culture: the (violent) encounter between the Israelite David and the giant Goliath of Gath (1 Samuel 17). 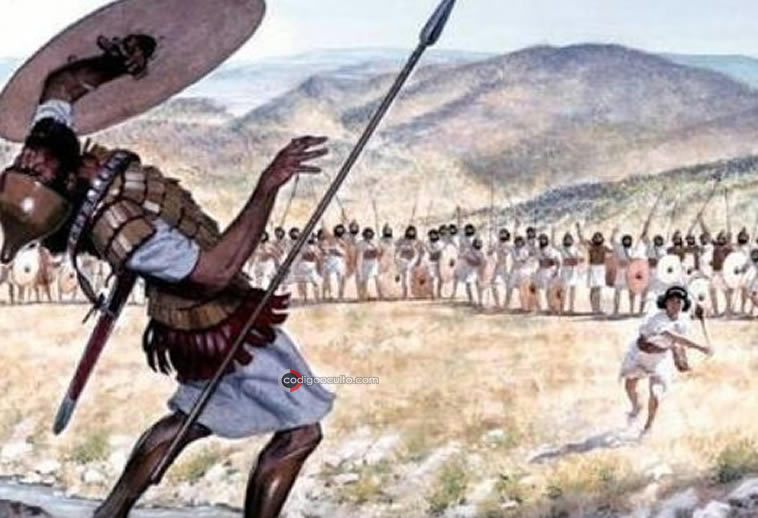 David against Goliath. (Public domain) It should be noted that both in the Deuteronomic story and in the Yahwist source above, giants are associated with increased violence . As the Hebrew term laqach suggests, they take the “daughters of men” by force, leading to the birth of a hybrid , superhuman offspring , which extra-biblical tradition identifies with Greek gods and heroes . (In the first volume of his Antiquities of the Jews, the 1st century AD Jewish historian Josephus links the giants of Genesis to Greek demigods like Hercules.)

In subsequent encounters between the giants and Israel, the result is always violent and leads to war and bloodshed between the two groups. It is this particular characteristic of the giants that gives us an idea of ​​what may have happened to them not only in ancient Israel but throughout the world.

The extermination of the giants

We are provided with an explicit account of the fate of the prediluvian giants in extra-biblical literature. In the apocryphal book of Ecclesiastical, included in the Catholic but not Protestant canon of the Old Testament, we find the following statement.

The ancient giants, who were destroyed by relying on their own strength, were not exonerated for their sins. (Ecclesiasticus 16: 8)

Two things are suggested in this statement by Ecclesiasticus. First, that the ancient giants had extraordinary power and strength. Second, their destruction came about because they relied too heavily on this power. 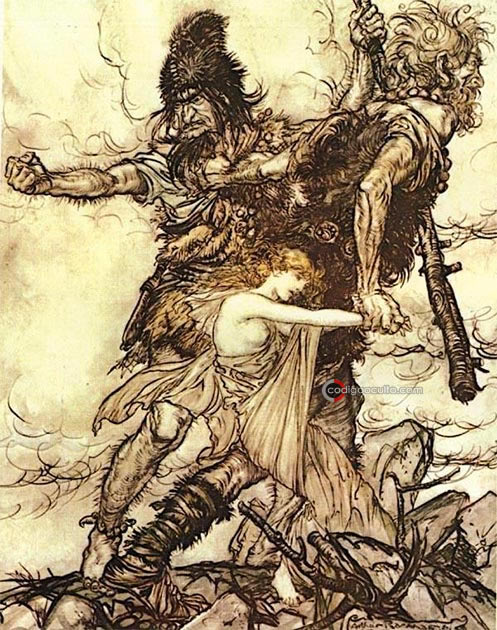 In biblical terminology, “relying on one’s own power” has both a religious and a secular meaning. In the above context, it refers to neglecting (in the view of the biblical authors) the power of God in favor of assuming that one’s power and strength are sufficient.

In the latter context, it is always used in reference to the abuse of power, usually through violent physical oppression. However, the text does not indicate whether the giants killed each other or were destroyed by their victims and ultimately rose up against them.

More information on the question of the giants and their ultimate fate can be found by turning to the Hebrew text of the Old Testament. In Yahwist’s account of the flood in Genesis 6, the author repeatedly points out that because of the giants the Earth was filled with violence (Hebrew: hamas). As noted in Strong’s Hebrew Dictionary, the term hamas is often used in reference to self-destructive violence, meaning acts of physical violence directed not only at others, but ultimately towards oneself and dealings with members of your own community. 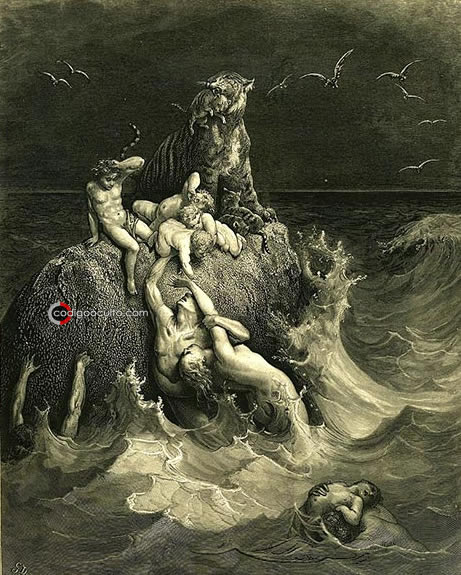 In other words, Hamas is a type of near-suicidal violence and self-consumption, and their association with the giants here suggests that even before the actual flood event, they were in danger of extermination by killing each other. One could even conclude, based on the use of hamas in Genesis 6, that the giants were destroyed through some kind of civil war.

Such an understanding of the fate of the giants would correspond well with archaeological evidence and oral traditions around the world dealing with giants, particularly in North America. In the Midwest region of the United States, two pre-Columbian civilizations, Hopewell and Adena, appear to have mysteriously and rapidly disappeared after what archaeologists infer was a sudden and massive battle between the two groups.

This parallels the type of self-destructive violence that is described in relation to giants in the Old Testament. On the other hand, there are traditions among various Native American tribes of violent conflict between their ancestors and the ancient races of giants in North America.

For example, the Pauite Indians refer to an ancient race of hostile and violent giants known as the Si-Te-Cah. As in the biblical account, the giants oppressed these ancestors who eventually rose up in revolt against them and exterminated them.