A new analysis of data from 40 years ago found that NASA’s exploratory spacecraft could have detected evidence oflife on Mars decades before the discovery of organic matter on the Red Planet, but the results were likely destroyed before reaching Earth.

The 1976 Viking rovers were sent to Mars in search of organic matter, but returned with nothing.

By re-examining data from the Viking mission, the researchers identified chlorobenzene, a chlorinated organic material created in reaction with salt found in Martian soil, according to findings published in the Journal of Geophysical Research: Planets.

A 2008 NASA mission that explored the north pole of Mars found that salt, called perchlorate and used in rockets and fireworks, became explosive when heated excessively.

That means the Vikings, who used an instrument that heated soil samples to locate the organic material, may have burned the carbon molecules found in the soil when the perchlorate caught fire.

Most Martian missions have searched for organic matter through a heating method, a likely cause of the data lag.

The Curiosity rover that identified organic molecules in three-billionyear-old Martian rocks used the same method, heating the samples in an oven to more than 900 degrees Fahrenheit, to release sulfur and organic carbon concentrates, NASA said.

The sedimentary rock, called mudstone, probably did not contain perchlorate.

“It was completely unexpected and inconsistent with what we knew ,” NASA planetary scientist Chris McKay told New Scientist magazine. “You gain new insight and realize that everything you knew was wrong . ”

The study’s lead author, Melissa Guzman, postulated that chlorobenzene could have traveled from Earth on the Viking landers, contaminating their instruments.

The Curiosity team also reported levels of methane, the simplest organic molecule, that varied seasonally, further evidence of the potential for life on Mars.

And while 95 percent of Earth’s methane is generated by biological processes, such as livestock rotting and natural gas leaks, the presence of methane is no guarantee of life on the planet.

“It’s a gas in the atmosphere of Mars that really shouldn’t be there,” NASA Jet Propulsion Laboratory scientist Chris Webster told National Geographic.

Another study published weeks earlier in the same journal uncovered inorganic secrets about the Red Planet’s past.

The researchers found nearly 800 “ghost dunes,” or sand-covered shells from ancient dunes, evidence that water and lava covered Martian sand dunes with sediment that hardened before the wind blew it away.

According to the researchers, ancient microbes could still live in dunes containing ancient sand.

“There’s probably nothing there ,” study author Mackenzie Day told the American Geophysical Union. “But if there was ever anything on Mars, this is a better-than-average place to look . ”

In an image of Mars taken by NASA’s Mars Reconnaissance Orbiter, you can see what at first glance… 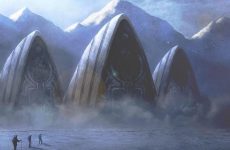