Carl Higdon’s story is amazing: he met an alien named Ausso One and traveled 163,000 light years from Earth to a distant planet, where he was scanned with a strange device. In addition, the alien being confessed to Higdon that his species traveled to Earth to hunt… Human beings? Animals? That was never known.

October 25, 1974, Carbon County,  Wyoming, United States . Carl Higdon  was a 41-year-old man, dedicated to the oil industry. That day he went hunting for the weekend  in the  Medicine Bow National Forest , as he was an experienced hunter. Although he traveled by car to reach the site, he had to follow the path on foot, due to the poor condition of the road. Carl Higdon would never imagine that he would travel to another planet with an alien named Ausso One . 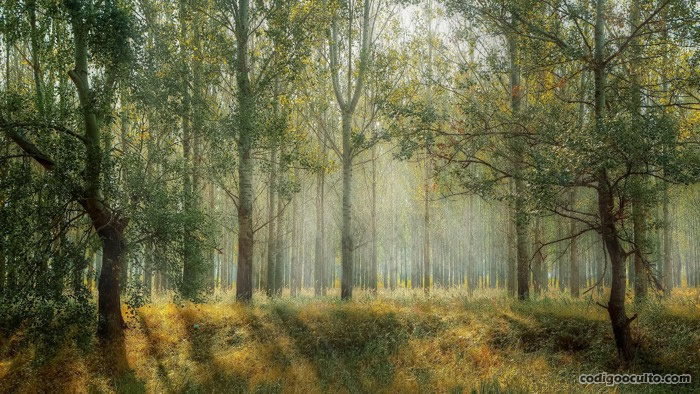 As he entered the forest, more and more the morning sound was muted, he seemed to be in a place where there was no human presence, a totally uninhabited place. Without warning, he came across a group of deer, there he observed the leader of the herd, it was a huge male with branched horns. Excited, he readied his rifle and aimed at the animal; BAM! He fired without shaking his hand,  but something strange happened, leaving Higdon stunned.

When the bullet came out, there was no sound at all, and the rifle also did not recoil as normal. The bullet flew forward slowly, without any explanation it fell to the ground as if it had collided with something invisible along the way.

Suddenly, the oil worker felt something strange in the air, he became more and more tense. He had the feeling of being in a place with  static electricity . Frightened, he decided to pick up the bullet, but in doing so he found something unusual: it  was deformed, it looked as if the bullet had collided with a hard object . Blinking, he realized that the herd of deer had escaped. Still, Carl Higdon felt that he was not alone. 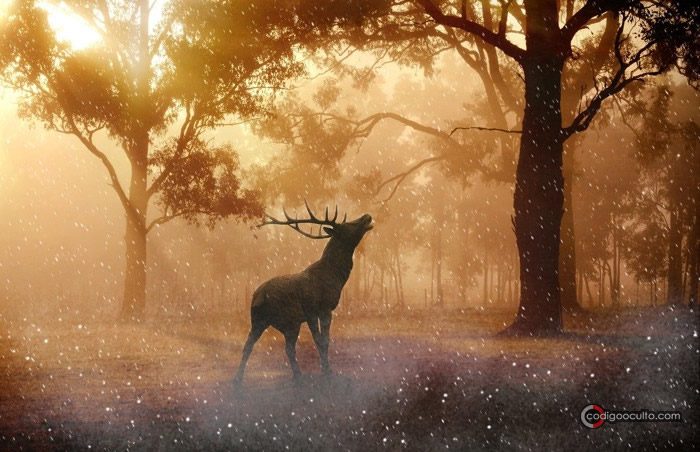 Carl Higdon discovers a strange creature in the woods

Turning to one side, I saw a being with the appearance of a man, he was standing. At first I thought he was a hunter like me, I lowered my gun. But, he came out of the shadows to where I was, and I immediately realized that something was not right… My heart began to beat faster and my knees felt shaky, to the point of wanting to faint. I was like, ‘Shit, I should have stayed in McCarthy Canyon like I originally planned!’ Carl Higdon

Carl Higdon  felt that something was coming when he heard the branches crack on the ground. There he saw a human figure behind the shadows of the surrounding trees, it seemed to hide, but not for long. After a few minutes, that presence came out of the trees, and Higdon saw its appearance: 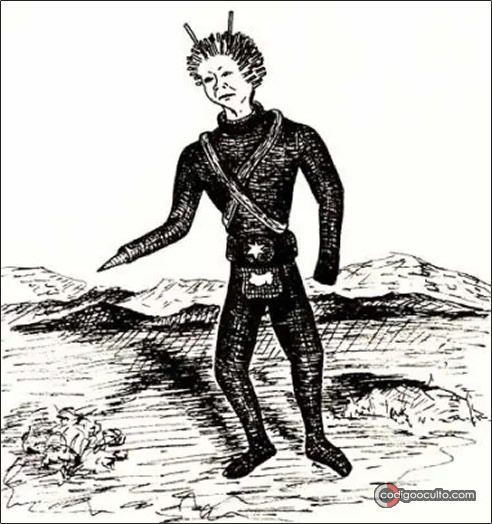 And that’s not all, his arms were weird: in one he had a chisel (tool for cutting hard things) instead of a doll. In the other he had no articulation of a human hand.

The enigmatic being approached him and looked at him for several minutes, until he asked him a question as if it were a friendly introduction. In English he said to her: “How are you?” Terrified, the man answered him with a “fine”. After a minute, the creature nodded getting closer and closer…

Although it had a strange appearance,  the being did not seem threatening , even asking Carl Higdon if he was hungry. 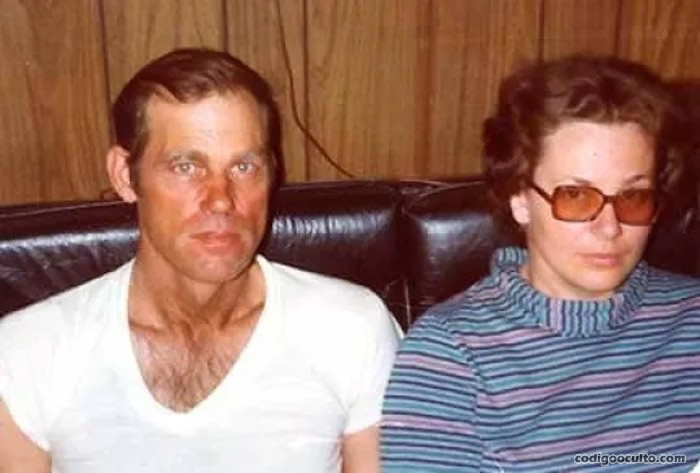 Without letting Higdon answer, the  humanoid being  took out a plastic bag, and using a levitation technique on the object, handed it to the man, who checked the bag and found four pills inside.

“Those pills are capable of keeping you full all day,” the creature told him in a friendly tone. Finally, the being introduces itself by calling itself “ Ausso One ”, before pointing to a transparent, cubic-shaped object. However, he had no windows, no front door, and no landing gear; he was just on the inert ground.

Carl Higdon travels 163,000 light years from Earth with Ausso One

Without hesitating for a moment, Ausso One asked Higdon if he wanted to take a walk, but inexplicably the subject was already on the ship. While he was confined to his feet and arms with tapes,  the questions confused the tanker :

However, these questions were calmed when he saw something similar to a force field, where five frozen deer were floating. The man was sure that they were the same animals that he saw in the forest. Suddenly, a creature similar to Ausso One placed a helmet on his head. 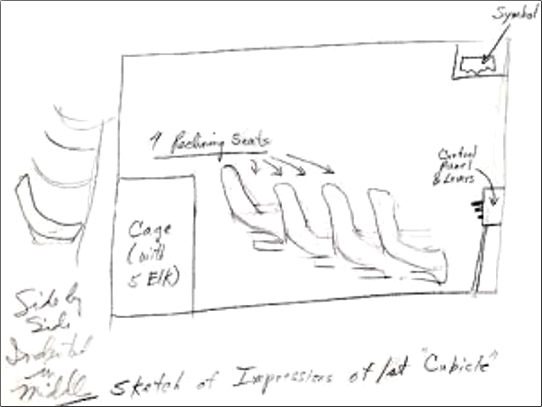 The ship began to take off, meanwhile Higdon watched on the transparent walls as the ship went up and left the  planet Earth . In a blink they were in deep space.

Carl Higdon traveled 163,000 light years from Earth with Ausso One to an enigmatic planet , where there was a large luminescent tower. However, the man saw something unusual: there were human beings in that place, but he never knew who they were and why he was there.

Ausso One told him that they were going to Earth to hunt, and that they had traveled 163,000 light years from the terrestrial planet. Then, they went to a room to scan Higdon, but the creature told him that it did not conform to his intentions, and that it was best to take him home. 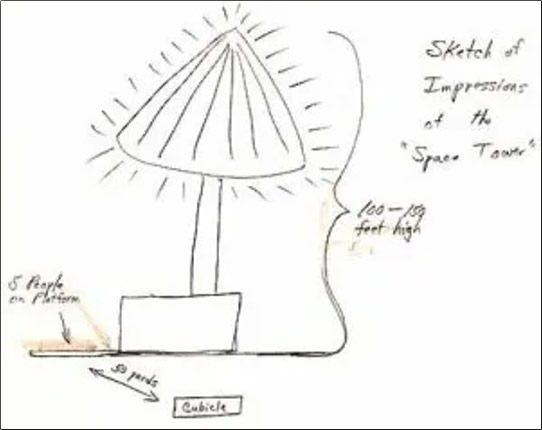 In a blink they returned to Earth with the spaceship , without saying a word, they left the man in the forest, where the rifle was lying on the ground. The alien beings  disappeared , while Higdon was confused, disoriented and afraid.

Carl Higdon put out a distress call for authorities to find him, but his story would forever mark Carbon County. Some people mentioned strange lights that day, and with a trembling voice Higdon told what had happened.

Through  hypnosis  they managed to recover his memories , he was even evaluated by medical professionals, who were astonished to find that the scars left by tuberculosis had disappeared, along with kidney stones.

In addition, the crushed bullet was found in one of his jacket pockets. Investigations showed that this was possible if the bullet had made contact with an object harder than wood or stone from the forest.