For the past few years, the CIA has disqualified extremely important information regarding UFOs and aliens. One of the most surprising was that of petrified Russian soldiers after the attack of an “unidentified”.

Normally, these documents show parts of the investigations done by the CIA or other security organizations. But the recently declassified files seem even illogical.

An incident that occurred in the former Soviet Union , where a strong confrontation between Soviet soldiers and aliens is mentioned.

Declassified CIA Document: The Incident Between the Soviet Union and UFOs

The information traveled through different media and web portals. According to the documents, there is talk of a total of 23 Soviet soldiers who were completely petrified by a group of aliens.

He mentions an attack by the soldiers that managed to bring down one of the ships in which they were traveling. After that came the counterattack that turned the men to stone.

The file is a translation made by the CIA of an article published by the Ukrainian daily “Ternopil Vechirniy”.

It is believed that in 1991, after Mikhail Gorbachev was overthrown, many KGB files found their way to the CIA. Including a 250-page dossier where this incident is mentioned, backed up by photos and testimonies.

The presence of a flying saucer over a Soviet military unit, which was training in Siberia, is mentioned.

Noticing its presence, one of the soldiers fired a surface-to-air missile that hit the UFO . From the downed ship emerged ” five short humanoids with large heads and large black eyes.”

Two soldiers survived the attack. After leaving the rubble where they hid , they fled to report what they had experienced to their superiors.

The story mentions how the 5 beings joined in a kind of white glowing sphere , which emitted a strange buzzing sound. The sphere exploded within minutes and instantly, the 23 soldiers who were looking at it turned to stone.

The newspaper report mentions that the KGB report says that the remains of the petrified soldiers were taken to secret facilities near Moscow.

The analyzes revealed that, somehow, the molecular structure of those involved changed rapidly . Transforming it into something similar to limestone.

This document declassified by the CIA has been questioned a lot. Much of this reporting has been found to be misinformation to divert attention from what is “really important.” 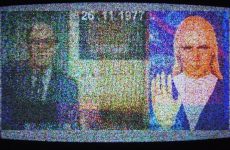